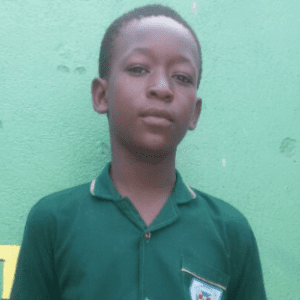 Kwame is 11 years old. He dropped out of school when he was in Class 3. His ambition is to join the army. He feels strongly about the need to serve his country, and the best way for him, he says ‘is to be a soldier’. He loves playing football and is very athletic. He re-started school in May 2016, in Class 2.

Kwame understands that if he does not perform well in Class 2, he will be repeated or taken out of school, put on apprenticeship to learn a trade. He is very playful and has a great sense of humour, which sometimes makes him come across as not studious.

He is extremely tall, and a bit worried about the age difference between him and his classmates, which makes him stand out. He is grateful though for having the opportunity to go back to school.

We have identified Kwame will do much better with a one-to-one lesson during the summer vacation. With funding in place, this can be achieved and enable him to catch up with his peers.

Godfred is more settled at school. His report showed he performed better than expected, the extra tuition has boosted his performance and he is continuing with it. He was promoted to Class 3 at the start of the academic year. He is not so much concerned about the age difference between him and his peers. He has made friends and engages well in most of the school’s extracurricular activities.

His performance at school has been excellent!

He is having extra classes in the summer to boost his performance to enable him progress to the next class in the upcoming academic year. Kwame was concerned he did not have an English name like his peers. He chose the name Godfred and we are working with the authorities to legalise it.